Dear domino players, if we wanted to, we could »lay out« the Mary Theresa Cup again this year, as well as the MTC Points Winners Cup, on Sunday, 18.09.2022 from 10:00 am at the Autismus-Therapiezentrum, Dorotheenstraße 1, 28201 Bremen, Germany.

This way the out-of-towners could still get back home.

With kind regards
Björn A. Wolst 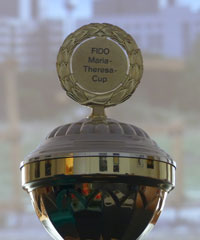 Decentralised champion­ships have their cost-efficient justification, but what if you want to experience the other domino players live for once? In 2002, Rüdiger Neukamm created an incentive for real competitive encounters by donating a cup. If there is a Mother Theresa rule, Mary Theresa must not miss out, he thought, and so the name of the tournament was born.

The first tournament consequently took place on his premises, and since then domino players have met once a year, if possible, to choose a new winner of this challenge cup.

Dissatisfied with the difficult-to-understand FLADUB formula that calculates the winners, Björn Wolst from Bremen donated another cup for all those who simply score the highest number of points at the tournament. Since 2015, this second trophy has also been on an annual tour.

The winners of the Mary Theresa Cup