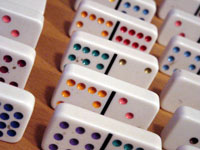 Domino game: board game for 2 to 8 players with mostly 28 rectangular dominoes divided into two fields. Each field carries 0-6 points (eyes) in all possible combinations. The dominoes are joined to the fields with the same number of points. The winner is the one who has placed his or her stones first.«

This statement from the Brockhaus of 1999 reflects the whole misery in which domino players in Germany have to assert themselves. Already the connection of the statements with mostly 28 … pieces and 0 - 6 points in all possible combinations makes it clear that dominoes are rather associated with setting up and knocking over pieces than with mathematics.

If all possible combinations from 0 to 6 are to appear on one stone each, then according to the formula (n+1)×(n+2)÷2 required for this, where we insert n=6, it results that there must always be exactly 28 stones …

When FIDO talks about dominoes, it usually means a double twelve, double fifteen or double eighteen, named after the domino with the highest number of points! Such games only come from civilised domino areas (for example, the USA) and are almost impossible to get in Central Europe.

The domino games that come with the usual game collections most often only have a double-six to offer. The double-six domino is the original form, probably first brought to Europe from China by Marco Polo. Today it is widespread in the Spanish-speaking world, but also in Arab and Central Asian countries. This game is played by two couples who, without being allowed to communicate with each other, try to place their pieces in such a way that the opposing couple has more points left over - these are credited to the winners. Further information (in Spanish) can be found on the homepage of the »Federación Internacional de Dominó (F.I.D.)«.